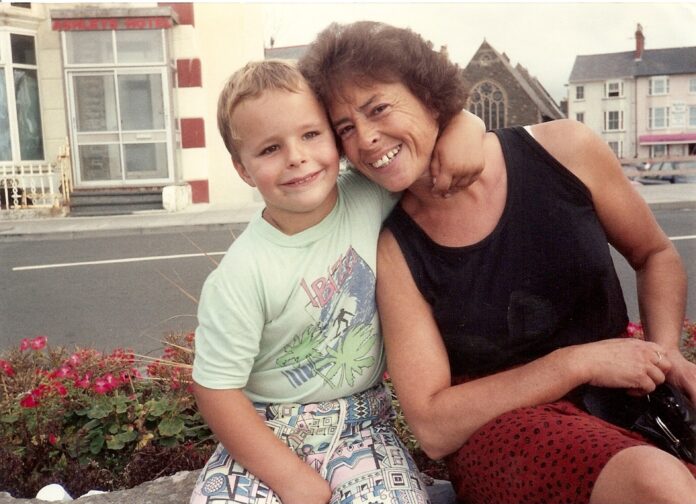 I was born on Tuesday 20 November 1984 in Wrexham, North East Wales.

Soon into my life, my mother, Hazel Davies (then Edwards) noticed that where other children fixed their gaze on their mothers, I withdrew mine.  It was also noticed, I was not making progress with sitting up and crawling along with problems such as walking and delayed speech.  I had  other difficulties such as not being able to sit up, getting undressed as soon as I got home from an outing, and failing to differentiate between hot and cold water. I also flapped my hands.

When I was three, it was obvious to my Ma that there was a very serious problem stunting my progress. The paediatrician at Wrexham Maelor Hospital had previously called me “spoilt” because I had two much older sisters and was given more attention. It was now clear that this was not the overriding problem. My Ma was at the end of her tether trying to find out what was wrong with me. She wanted guidance, support and, most of all, answers, but this was again not forthcoming. It is sometimes easier to cope when you have a ‘label’ to attach to the symptoms as then you can start to tackle the issue and find coping mechanisms to deal with it. But even this did not appear to be available.

Appointment after appointment ensued, with professionals claiming that I was spoilt or levelling other discouraging comments at me. In a 9am appointment on Monday 3 April 1989, at Wrexham Maelor Hospital, I was eventually diagnosed as severely autistic. The consultant’s only words of ‘advice’ to Ma were, “To go home and watch Rain Man. It is likely your son will be institutionalised.” Ma left the hospital in a daze as she took me in my pushchair out into the mild, mid-spring weather. After taking a couple of days to gather her thoughts, Ma was determined to prove the consultant wrong. I would talk! I would walk! I would mix in society and be the same as my sister, Melanie! Ma went to seek help, which, to this day – more than 30 years later – is seldom forthcoming.

In September 1989, I briefly attended a special school. Ma went in the taxi with me. No other pupil there could talk, apart from me. During the school day, Ma stayed with me – apart from one time when she was reluctantly persuaded to have a bit of a break. When she returned, she saw me tied up. The school claimed that this was to “control me”, which, needless to say, we disputed. Understandably, after this incident, Ma decided to keep me at home and educate me herself despite having no formal educational training.

Ma wanted to make sure I was safe from harm, and after what had happened at the school, it would take some convincing for me to go back! I would get changed for P.E. and she would take me around the locality on nature walks as part of another lesson. Ma taught me to count, although I regurgitated the numbers like a parrot with no real understanding of what they were. This was just a stop-gap solution and I would eventually find a school. However, the fight was not finished, it was not the end, only the beginning.

When I was eleven in January 1996, after an already chequered schooling up until that point, I became a pupil at a Special School in a county within a 45 minute drive from my hometown of Wrexham.

After ten months at this school on Tuesday 12th November 1996, I was allegedly badly assaulted by a member of staff. I still suffer from nightmares on a regular basis from this, which is exacerbated by the member of staff’s child being a high-profile television personality, who comes up on my smartphone newsfeed regularly.

My case was thrown out by the Crown Prosecution Service, because vital witness statements hadn’t been taken by the police, Ma got to work in her quest for her autistic son to be believed.

After many setbacks over a two and a half year period, Ma attended a hearing with the Criminal Injuries Board. Ma was then taken into a large room where a number of men sat around a very large oak table. These men were all professionals and experts in their chosen field with just little old 5’3” Ma. She was asked if she wanted a cup of tea. Ma’s terse and brusque riposte was, “No, I have come for a fight, not refreshments.”

The large table and men were quite daunting, but Ma showed how she felt in this manner, she took her notes out of her handbag and started to tell our side of the story. Whilst reciting our story Ma was quite abrupt and stern. The Appeals Board, however, explained that they were ready to give their verdict. Ma thought this to be strange as she hadn’t really started to give our side of the story. She had come for a fight as no one had believed us for two-and-a-half years and we didn’t believe anyone was likely to suddenly believe us now. Ma was asked to put her notes away. “We believe you,” she was told. However – quite understandably, given our trials, travails and tribulations over the previous two-and-a-half years – Ma was quite taken aback by this statement. She continued to plead our case. One of the professional men got up out of his seat, went to Ma and put his hand on her shoulder in a caring manner to further inform her of our success.

What was happening was still not sinking in and Ma told the gentleman to “Get off”, again rather abruptly. She was then asked in a louder, more authoritative tone to “Calm down. We believe you, Ms Davies; you have won your case. We decided before you entered the room, after reading all the information.” Ma, again not fully believing what was happening, said, “Do you really believe me? I have fought for so long. Thank you so much.” One professional on the other side of the table explained, “I understand how you feel. I admire you for the love of your son that you have displayed, as well as your fire and determination. Today lets you know that a crime of violence took place that day.” Ma replied again, rather disbelievingly, “Have I really won?” The professional said, “We would not have made the compensation award to you if we didn’t find that a crime of violence had taken place.”

During this time, I had been out of schooling for fifteen months. On top everything we had already been through, Ma still had to fight for a school placement for me. To attempt to gain funding for a place at St. Christopher’s Special School in Wrexham, which, strangely, had seemed a lot easier when I was attending a school outside the county just over two years prior, Ma went (unannounced) to the Director of Education to state my case as the local authority had shown a resistance to me becoming a pupil there. Ma was determined for this to change.

After asking the receptionist if the Director of Education was in his office and getting a negative response, Ma subsequently noticed someone ask the same question and get the opposite answer. At this point, she observed an employee punching in the door code on a security keypad and, at the same time, Ma memorised it. When the coast was clear, she put in the door code and got through to the Director of Education’s office. Needless to say, he was a little taken aback by my Ma’s presence in his office. After a little persuasion, Ma got me my placement at St. Christopher’s.

My mother has always been there for me, along with my sister Melanie Beckley (nee Edwards). Melanie is my older sister – born on Saturday 29 July 1972. From day one, Mel has been like a second mother to me. Twelve years my elder, she was at St. Joseph’s Roman Catholic High School in Wrexham when I was born. Her teacher even used to bring her home at lunchtime to visit me. She was smitten from day one and has never been jealous or envious of me. Although we often argue, we are probably as close as a brother and sister can be. She has always been there to support me, Ma and the rest of the family. She has never moved further away then initially around the corner from Ma and I before moving next door in June 1998.

After I was made redundant from my job as a Broadcast Statistician, that I had been in for eleven and a half years on Monday 21 April 2014, Melanie decided that she would step up to help support me. This was after the NHS Services had cut all my support package disabling me from realistically attempting to get another paid role at that juncture of my life. Without her guidance, although it was most certainly my words and style of writing, my published memoir entitled “I’ve Got a Stat For You- My Life with Autism” (which has sold over 1,100 copies, about seventy percent of which offline) wouldn’t have been as coherent or on track.

During the much longer Coronavirus Lockdown in the spring and early summer of 2020, Melanie stepped up again. She turned her garage into a strength & conditioning gym for me to enable me to follow the thorough remote programme that my coach had set during this unprecedentedly, difficult period for all, including those with autism.

At this time, we also started going for walks everyday in our locality thus rediscovering the natural beauty of our vicinity, which we had failed to notice for many years. Melanie stepping us like she did enabled me to keep my stress and anxiety levels low. In fact, as I write this on Bonfire Night 2020 towards the end of the Welsh “Circuit Breaker” Lockdown, I have gone six months without a meltdown, which is longer than at anytime since at least the 2000’s, but possibly ever. In turn, this has helped our Ma as well as she is now almost 78 with her mobility greatly impeded after a bad fall broke the neck of her femur in mid-July 2014.

Without these two wonderful ladies in my life, I would have undoubtedly fallen through the cracks at the very first hurdle upon the cruel prognosis from the specialist at age four. I certainly wouldn’t have written three published books, including memoirs, worked at the television station of my boyhood heroes for so long, won several awards for my non-profit speeches and volunteering, or be set to start a long coveted paid role as an Assistant Archivist at a local Heritage Trust in early 2021.

These two ladies deserve all the accolades imaginable. They are heroes, which is what the comedian, writer and broadcaster Robin Ince called my mother in his glowing review of “I’ve Got a Stat for You-My Life with Autism”. Ostensibly they don’t like praise, but I think they do really because they are.