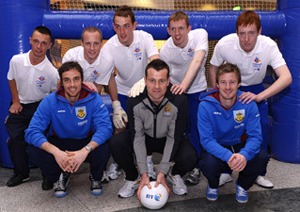 Famous faces from football’s Premiership were on hand in Manchester earlier this month to introduce a new sport to the BT Paralympic World Cup. Manchester City Captain Shay Given and Wade Elliott and Michael Duff of Burnley helped organisers unveil 7-a-side football as the latest addition to the world’s largest international multi-sport competition in elite disability sport.

The Premiership stars joined members of the GB 7-a-side team for a sport demonstration at the Manchester Arndale Centre to highlight the sport, which joins athletics, wheelchair basketball and swimming in the Games.

Given said, “The BT Paralympic World Cup has become a well known event in Manchester and it’s fantastic to see Football 7-a-side introduced as a new sport. The team has a lot of talent and we wish the GB squad competing in the event the best of luck and will keep an eye on their progress through the competition.”

The BT Paralympic World Cup will take place in Manchester in May and roughly 400 athletes from 31 countries are expected to compete across the different events.
For more information, visit:
www.btparalympicworldcup.com

Can we level the playing field?