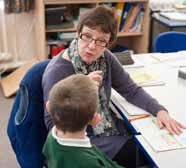 The figures suggest that deaf students are falling further behind their hearing peers, 69 per cent of whom achieved five GCSEs in 2012.

The charity The National Deaf Children’s Society (NDCS) has blamed cuts to services for the fall in standards, saying that the Government is failing deaf children. One in three councils are taking away the support deaf children need, such as teachers of the deaf and speech and language therapists, according to investigations for the charity’s Stolen Futures campaign.

The Government is refusing to take action to stop “irresponsible local council cuts”, says Jo Campion, Deputy Director of Policy and Campaigns at NDCS. “The attainment gap is widening due to councils and the Government constantly devaluing deaf children and taking away the support they need, putting the futures of thousands in jeopardy”, she says.