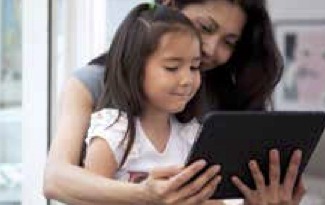 The survey also showed the benefits of using touch-screen technology for boys, who engage with reading and educational activities for longer than with books alone. Twice as many boys than girls look at or read stories on a touch-screen for longer than they look at or read printed stories. More boys than girls use a touch screen for educational activities than for entertainment.

In the second Early Years Literacy Survey carried out by the Trust and Pearson, parents and early years practitioners responded to questions on their access, use and attitudes to books and stories on touch-screen devices with children aged three to five. The research examines the influence of reading practices on children’s vocabulary aged three to five. The findings highlight the increasingly significant role that technology plays in the lives of under-fives, both at home and in their pre-school educational environment.

A varied reading diet could also be a route to improved vocabulary, according to the new findings. Children aged three to five have a wider vocabulary if they read stories in both print form and on a touch-screen compared to those who don’t use technology.

The research also looks into the use of technology in early years educational settings, and finds that the majority of pre-school teachers and practitioners say they want more access to touch-screen technology. However, practitioners feel far more confident sharing stories with children on paper rather than on a touch screen, and a quarter do not think technology has a place in their pre-school educational environment.

The report, Children’s early literacy practices at home and in early years settings can be accessed at: