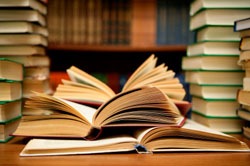 Children who use the library are nearly twice as likely to be above average readers, according to new research published by the National Literacy Trust (NLT).

The study of over 17,000 pupils aged eight to sixteen years found that eighteen per cent of young people who use their public library are above average readers, compared to just 9.5 per cent of those who do not visit the library. Library users are also more than twice as likely to read outside of class every day.

The research also revealed that 44 per cent of eight- to sixteen-year-olds surveyed use their public library, and those in the seven to eleven age group are nearly three times more likely to use the library than those aged between fourteen and sixteen. The most common reasons children cited for not going to the library were that their family does not go (52 per cent) and that their friends do not go (40 per cent).

“Our research shows just how important a role libraries play in supporting literacy”, says Jonathan Douglas, Director of the NLT. “In the UK today one in six people struggles to read, write and communicate, which can affect their health, confidence and employability.”

The research was published to coincide with Save Our Libraries Day on 5 February 2011, a day of protest against the planned closure of 400 UK libraries. More than 100 libraries across the UK staged events, including read-ins, workshops, concerts and storytelling events, to mark the Day.

Early years literacy in the spotlight