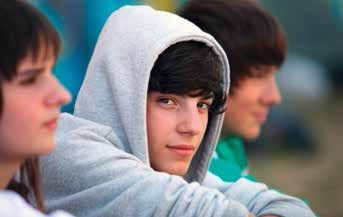 Young people with Tourette’s syndrome recently joined parents and teachers to take part in a study of how the condition affects students in secondary education.

The three challenges most frequently reported by the young people were problems concentrating in class, unhelpful responses by school staff and teasing and bullying by other students, such as name-calling and mimicking tics. Some also reported that homework, examinations, writing, anxiety and managing anger were additional challenges for them. For example, severe movement tics involving the hands can cause difficulties with completing homework and with handwriting. Vocal tics, such as making sounds or saying words out loud could sometimes attract unhelpful responses from school staff, such as being told off.

The young people reported significantly more victimisation than normal but relatively few staff were aware that their students were being teased or bullied.

Professor Georgina Jackson, who led the research at the University of Nottingham, described the study as the first to address the experiences of young people with Tourette’s from their own point of view. “Tourette’s is often seen purely in terms of the tics that affect many with the condition but for these children, there is often an awful lot going on inside their heads too, often related to anxiety over how to control their visible symptoms”, she said.

Young people with Tourette’s are keen to fit in, like any other teenagers, Professor Jackson believes. “The quality of their school experience and the development of friendships at this important stage of their life can have a huge impact on how they adjust to living with the condition in adulthood”, she said.

The results of the report, commissioned by the charity Tourette’s Action, will be used to inform the training of teachers on how to recognise and respond to the condition.

In the next issue of SEN Magazine, Professor Jackson and Dr Ruth Wadman will build on the study’s findings to examine how Tourette’s affects pupils in secondary schools.

Seeds of Hope for Duchenne