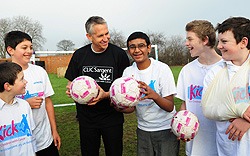 Football icon Gary Lineker launched the annual Kick for Children with Cancer fund-raising campaign at Carew Manor Community Special School in Surrey this week. Run by children’s cancer charity CLIC Sargent, the campaign is a UK-wide football fund-raiser which aims to encourage schools and youth football clubs to take part in sponsored football events to raise money to support children with cancer and their families.

The events will take place between May and July this year, by which time World Cup fever is likely to be reaching epidemic proportions across the country. It seems inevitable that spot kicks will play an important part in the summer’s global football festival, and many schools are adopting the penalty shoot-out formula for their fund-raising events.

Speaking to SEN magazine after a penalty competition with children at Carew Manor, Mr Lineker said “We got a really good reaction from the kids; they all managed to score at least one penalty each…we’ve had a bit of fun and raised a few bob in the process.”

Widely regarded as one of England’s finest ever players, and now the anchor of the BBC’s legendary Match of the Day programme, Gary Lineker is a patron of CLIC Sargent and describes the charity as one “that I have been proud to support for a long time”.

The former England star’s son, George, was diagnosed with leukaemia eighteen years ago when he was just two months old, but he went on to make a good recovery. “We were some of the fortunate ones…but not everyone is in the same boat, which is why we continue to try and raise money until we find a guaranteed cure”, Mr Linker said.

To register, and for a free information pack about Kick for Children with Cancer, visit:
www.clicsargent.org.uk/football

The May/June issue of SEN Magazine will include our full interview with Gary Lineker in which he discusses his son’s leukaemia, his work with the cancer support charity and his views on how sport can help children with disabilities and SEN.

He also gives us his tip for who he thinks will lift the coveted trophy in South Africa this summer, and tells us just what it’s like to take a penalty in a world cup semi-final…and score.

Can we level the playing field?