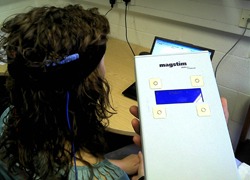 Mathematical abilities can be enhanced for up to six months by applying electrical current to the brain, claims a new report by Oxford neuroscientists.

Published in Current Biology, the research demonstrates for the first time that electrical stimulation can successfully enhance mathematical abilities, which may offer possible avenues of treatment in the future for those with dyscalculia. The research project builds on an earlier study by Dr Cohen Kadosh of Oxford University which showed that a temporary impairment in the processing of mathematical problems can be induced using brain stimulation.

The new study utilised standard tests for assessing mathematical abilities, including the Stroop test, which young children and those who struggle with numeracy routinely achieve low scores on. Student volunteers were timed completing a range of mathematical exercises using symbols representing different numerical values. Subjects were given either a placebo or low (1mA) electrical stimuli that ran from right to left, or vice versa, across the parietal lobe, an area of the brain that is crucial for processing mathematical problems.

Researchers found that those who received stimulation from the right to the left parietal lobe reached a high level of performance in these tasks after a few sessions, whereas those with stimulation from the left to the right parietal lobes significantly underperformed, mirroring the behaviour of six-year-old children. Those receiving the placebo produced results which fell somewhere between those of the two groups receiving stimulation.

Those who received stimulation from right to left parietal lobes were then re-tested after six months and were found to have maintained a high level of performance.
While the project is still in its early stages, Dr Cohen Kadosh clearly believes that the research could offer opportunities to help those with numeracy problems, including dyscalculia. “We are not advising people to go around giving themselves electric shocks, but we are extremely excited by the potential of our findings and are now looking into the underlying brain changes”.